The Mind Of A Schizophrenic

/ Art made by schizophrenics /

Schizophrenia is an intense mental disorder whose symptoms can include everything from abnormal social behaviors, to hearing voices, and not knowing what’s real. It often accompanies other, less severe mental conditions like depression and anxiety. Needless to say, the sum of these disorders can be hard to deal with. 50 percent of those diagnosed with schizophrenia also struggle with substance abuse as a means to cope.

It involves a range of problems with cognition, behavior and emotions and signs and symptoms may vary, but usually involve delusions, hallucinations or disorganized speech, and reflect an impaired ability to function. Symptoms may include: 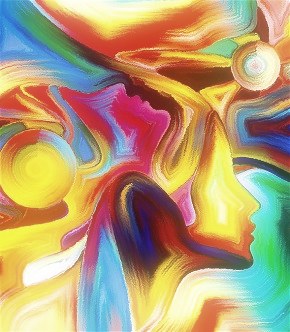 • Delusions – These are false beliefs that are not based in reality. For example, you think that you’re being harmed or harassed; certain gestures or comments are directed at you; you have exceptional ability or fame; another person is in love with you; or a major catastrophe is about to occur. Delusions occur in most people with schizophrenia.

• Hallucinations – These usually involve seeing or hearing things that don’t exist. Yet for the person with schizophrenia, they have the full force and impact of a normal experience. Hallucinations can be in any of the senses, but hearing voices is the most common hallucination.

• Disorganized thinking – Effective communication can be impaired, and answers to questions may be partially or completely unrelated. Rarely, speech may include putting together meaningless words that can’t be understood, sometimes known as word salad.

• Extremely disorganized or abnormal motor behavior – This may show in a number of ways, from childlike silliness to unpredictable agitation. Behavior isn’t focused on a goal, so it’s hard to do tasks. Behavior can include resistance to instructions, inappropriate or bizarre posture, a complete lack of response, or useless and excessive movement.

• Negative symptoms – This refers to reduced or lack of ability to function normally. For example, the person may neglect personal hygiene or appear to lack emotion (doesn’t make eye contact, doesn’t change facial expressions or speaks in a monotone). Also, the person may lose interest in everyday activities, socially withdraw or lack the ability to experience pleasure.

A State of Seclusion

A Theory of Universe

Symptoms can vary in type and severity over time, with periods of worsening and remission of symptoms. Some symptoms may always be present. In men, schizophrenia symptoms typically start in the early to mid-20s. In women, symptoms typically begin in the late 20s. It’s uncommon for children to be diagnosed with schizophrenia and rare for those older than age 45. It is often described in terms of positive and negative (or deficit) symptoms. Positive symptoms are those that most individuals do not normally experience but are present in people with schizophrenia. They can include delusions, disordered thoughts and speech, and tactile, auditory, visual, olfactory and gustatory hallucinations, typically regarded as manifestations of psychosis. Hallucinations are also typically related to the content of the delusional theme. Positive symptoms generally respond well to medication.

But there are some who have turned to something far less harmful to cope with their condition: art. The following pieces were created by people suffering from schizophrenia. While some of them may be disturbing to look at, for their creators these works help to visualize the unrest in their heads.

This makes the harsh consistency of their thoughts a little more bearable.